My grandad is legitimately a legend; he is the epitome of epic. He is well known in his local community – a popular man with a huge heart, but at the same time you certainly wouldn’t want to mess with him.

‘Pop’ has the most incredible, contagious fits of giggles and a smile which would win anyone over. A hug from him is both strong and comforting.

I love to listen to his stories. He has so many. Pop can have us both in fits of giggles or have me utterly captivated. His tales of his younger scallywaggish self are often hilarious for the unlikeliness of the situations or the fortuitous outcomes. Pop is a fine pub table raconteur!

During the Summer of 1949 in Kent, England,  people on the Snodland ferry had reported sightings of a large animal – with the eyes the size of saucers. This creature was confirmed to be a narwhal. This was very rare –  it is said to be the second example of the species to be washed ashore in England in 500 years, so surely an experience one would never forget.

My grandfather – Geoff Stevens was just 15 years old at the time. He was born in Wouldham and has lived there ever since; This is his true story and in his own words. I have great pleasure in being able to share it with you.

“After hearing about the creature, my friend Ray and I walked to Borstal, down into Borstal and along the sea wall. It didn’t take that long.

“No,” I said. “No good looking now as the water is now a bit deep along there.”

Ray insisted we continued. We walked further along the wall. Nothing. We walked and looked for signs of the narwhal but nothing.

We’d had enough of walking, looking for the thing! We made our way back to where we’d started. When we came back, there it was! It was on a mud bank sticking up in the middle of the river. That time of the year it was shallow.

We didn’t know what it was. It was a creature, but that’s all we knew. I went to the horses stable, where tinkers used to keep shire horses. I got a bit of rope from there.

If I knew what I knew now I could have walked there, the river was that shallow! Where I got in, I threw the loop of rope over my head and swam. My feet touched the bottom and I practically walked over to the thing.

I’d never see anything like it. I put the rope around its tail – poor thing had died or didn’t have much life in it – but it was in beautiful condition – and later on even the expert said it was immaculate condition, you could see it had only just died.

I tied it around its tail, got in the water again and pulled it along. It was heavy! I waded and swam a little bit until I got to the bottom again and struggled to the river bank.

I found the narwhal near to the army base set up for the war. The Canadians did their practice with amphibious tanks there and had put a new fence up – just plain wire.

I said to Ray, “bend the wire and go up the other end about 200 yards, bend the top wire and then put it all through”, he done that, came back down, waded back in and handed it to me, I tided it on to my rope, put it around a big elm tree that was there, as tight as I could.

Me and Ray pulled it in to where it was. It couldn’t get in there, unless we pulled it in there. The kids (Norris used to take them in the lorry to school in Strood) they got off, they had all seen it! One of the grown ups got off and they rang the KM and they came up and took a photograph of us. It was up in the paper, a lot of the old boys that were in the navy called it a basking shark and who knows what else.

It lay there, and the girl whose dad owned the Waterman’s Arms, had many pet cats, and she kept taking a knife down and cutting big lumps off of it to feed her cats with it ! It was a hot Summer – it was August!

It started going brown and stinking, the grownups started saying that the kids are getting disease off of that! And so the men, got some poles and at the next high tide, heaved it underneath it and got it floating, and it floated around the river and it landed on a mud bank by Townsend and Hooks.

There’s a big bank there. And it stayed there for a fortnight! It was really brown and really stinking! Then the next high tide came in at a metre higher than before and it picked it up and it managed to get it around to Reeds paper mill where they had overhead cranes there (they unload the boats with them). It laid there stinking ! Reeds said when they unload a barge, they put hooks in the barrels and all that’s left goes in a big net, and then put it in the net and then that gets picked up and taken. They don’t leave it in the boat, some of it was valuable even then! £40 a bale for birch pulp, making high quality paper!

They only had to drop the net over the back of it, and then pulled it low underneath this rotten mass, then the crane picked it up, dropped this mass in a lorry, the lorry took it along the New Hythe tip, a jcb dug a hole and they buried it.

A chap who was in America, his wife kept the KMs for him. When he noticed that he said “It’s one of them!”. Sent the photograph off to the natural history museum – and they said “.. It is one of them!”

I don’t know what happened to the horn, I can’t remember if it had a horn on it. They found out that Reeds had buried it, They came down by rail, and took the bones by rail – up to London, put a new skin on it and stuffed it. It was such a rare thing.

When you think – during the war they depth charge out in the Atlantic and everything , it disorientates things. It’s done it’s brain in! Either that, or something made it come up the Thames and Medway from ancient times years ago, but I – I’ll tell you why I think it was that. I used to get tins of margarine, off of bombed out boats! All rusty on the outside, and all clean on the inside! And, an angler fish I found out along there – We’re talking about 1949 and an angler fish shouldn’t be in the Medway, or the Thames! But if it had been depth charged or shocked.. ?

The intriguing thing is that the mud bank isn’t there now – because Townsend blocked the creek off. So the mud banks been washed way since.”

How many of us can say we dragged a Narwhal off the river Medway?.. I of course can read this back in his voice including picturing the smiles and giggles..

In this day and age… no way would you be able to do that! The story is absolutely bemusing.. ultimately sounds cruel, but it is what it is and even as a bit of a leftie vegetarian makes me crack a smile. I hope it does the same for you. 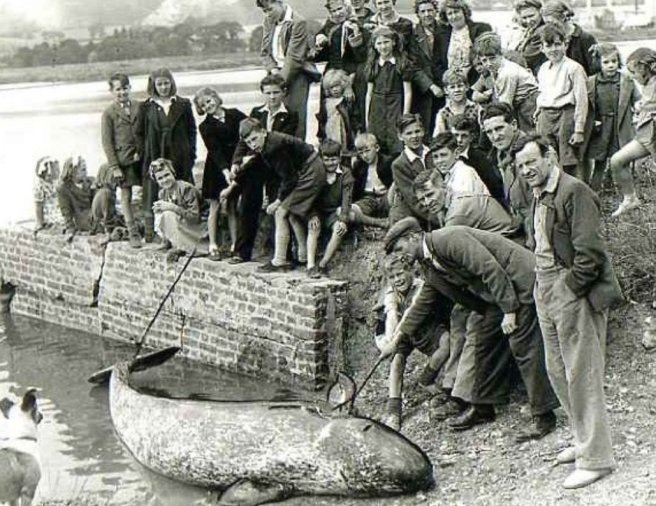 View all posts by Blog Monkey